Cognitive Radios is a wireless communication system which can adapt its behavior to make optimal use of the available radio spectrum in a changing environment. Engineers at Nutaq were able to demonstration a basic self healing cognitive radio system consisting of two radio nodes (Nutaq SDRs from the MicroSDR/PicoSDR series). A 20 MHz OFDM was used to communicate an HD video stream which will automatically change its frequency band in the presence of an interference signal [1]

With the introduction of cognitive capabilities in the recent years came new sorts of attack, exploiting vulnerabilities introduced by the nature itself of cognitive radios, creating opportunity for more research on security.

Researchers from National Consortium for Telecommunications (CNIT) and University of Florence in Italy were at the very forefront of studying this problem and proposing solutions. In [2], they introduce the concept of lower layer Cryptography, a physical layer security technique for cognitive radio networks. They have designed an original loop scheme for unique recovering of mutual information called « noise loop modulation » [3]. Recently, the noise loop modulation has also been proven to be a useful multiple access method [4].

The Noise loop modulation algorithms were implemented on Nutaq SDRs from the MicroSDR/PicoSDR series for validation over the air in a real world environment. The Nutaq Model-Based Design Kit and Xilinx System Generator software tools were used for algorithms implementation in the SDR’s FPGA.

The setup in the two pictures bellow relates to the final trials of the Physical Layer security project. « We have 2 legitimate nodes exchanging information with the NoiseLoop technique, while an attacher is trying to steal and decode information. The setup explores different nodes configurations in an indoor environment » says Luca Simone Ronga from CNIT. 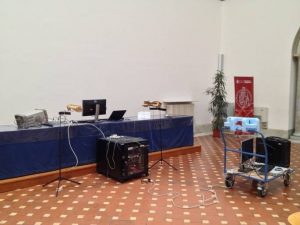 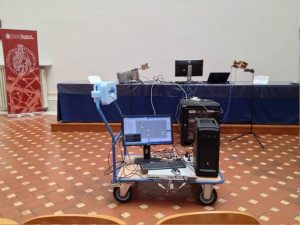