In the previous blog, we have discussed the reciprocity calibration for massive MIMO system using direct-path LS methods, or Argos. The calibration coefficients are estimated by the received signal from the single reference antenna.

In this blog, we will show how the generalized LS method is used in the massive MIMO reciprocity calibration. The full set of received signals in the equation

are considered by introducing the a least-square cost function

To find the minimum value of the LS cost function, the gradient of the cost function is set to zero for the calibration coefficient vector b:

which yields the estimated calibration coefficient as

where u1 is the first column of a matrix U,U1 is a matrix made of the N-1 last columns of U. The matrix U is defined as

If the antenna coupling gains βn,p is pre-known, as we discussed in the previous blog, then the performance of the estimator for LS method can be improved with this prior information. In this case, the cost function can be rewritten as

The minimum value of the cost function can be found by setting its gradient to zero:

where v1 is the first column of a matrix V, V1 is a matrix made of the N-1 last columns of V. The matrix  is defined as

We have simulated Argos, LS and weighted LS methods in matlab, the results are shown as below 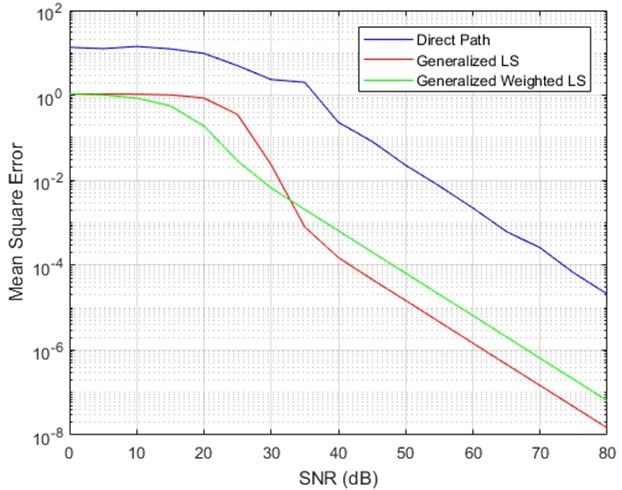