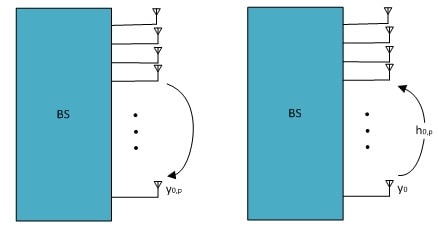 Based on this equation, finding the calibration coefficients bp is a statistic estimation problem.

Before we can tackle the problem, we need to know the parameter hn,p, which is the propagation channel between the BS antennas n and p. They are modeled as:

In the equation above, βn,p the channel gain from antenna coupling, which is decided by wavelength and intervals of antenna elements, φn,p  is the channel phase uniformly distributed from 0 to 2π and ωn,p  represents the multipath propagation with no dominant component, which can be modeled as a zero-mean Gaussian distribution.

In Nutaq’s design, we considered reference from other publications and roughly estimate the channel gain from antenna coupling with the equation βn,p = 0.03d-3.7[1].

Argos was first proposed by C. Shepard and H. Yu from Rice University. It estimates the calibration coefficients b = [b0,b1,…bp,…bp-1]T only using signals yn,p and yp,n. To simplify the notation system without losing generality, we set the reference antenna index to 0  and b0= 1. Then a least-square method can be applied here by trying to jointly optimize bp  and an,p with the following principle

And the solution to the equation above can be given by