Orthogonal frequency division multiplexing (OFDM) is the current dominant technology for broadband multicarrier communications. It is widely adopted because of a number of advantages:

·         Orthogonality of subcarrier signals, which enables the:

o   Trivial reception of the transmitted data symbols through an FFT

However, in certain applications like cognitive radio and in the uplink of multi-user multicarrier systems, where a subset of subcarriers is allocated to each user, OFDM may be an undesirable solution. In this blog post series, we look at some of the shortcomings of OFDM and conclude that FBMC could be a more effective solution in certain situations. To do this, we first need to return to the basics of OFDM and formulate equations that both apply to FBMC and OFDM.

In OFDM, the main problem comes from the side lobes of each subcarrier: 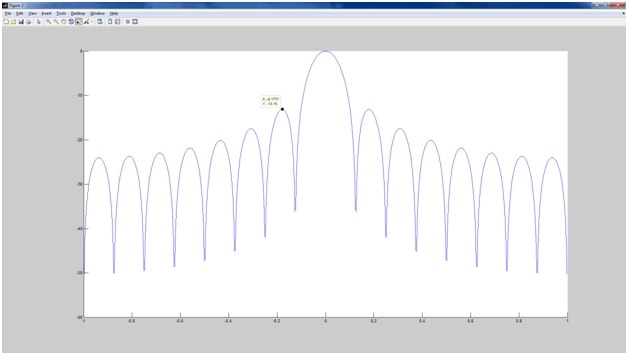 The figure above illustrates the frequency response of a subcarrier in an OFDM symbol. The first side lobe is only 13 dB lower than the main lobe. This frequency response is created by the filters associated with the synthesized subcarrier signals at the transmitter and the analyzed subcarrier signals at the receiver. It may not be apparent at first but an OFDM transceiver uses rectangular windowing functions to transmit/receive an OFDM signal. Let’s start by looking at an OFDM transmitter:

This figure tells us that an OFDM symbol is the sum of multiple modulated exponential (subcarriers) signals. However, where does the orthogonality between these subcarriers come from? Orthogonality (or inner product = 0) between two exponential signals is defined as follows:

For clarity, let’s replace T by  Tsym and let’s see how we can nullify the equation:

In other words, the exponentials are orthogonal if both frequencies are an integer multiple of a fundamental frequency of period Tsym (fk = k/Tsym, fi = i/Tsym). But there is another important observation to make: The orthogonality holds only in an integration interval of length Tsym. This observation can be better illustrated by the formula below:

This equivalent equation reveals the rectangular windowing that happens in OFDM. The difference between OFDM and FBMC lies in the choice of filter, which is commonly called the prototype filter. Since each subcarrier needs to be filtered by this prototype filter in OFDM, we can modify the transmitter block diagram accordingly:

From the block diagram, we can conclude that OFDM is a sum of windowed-modulated exponential functions and since the Fourier transform of a rectangular pulse is a sinc function, side lobes as previously shown are created for each subcarrier in OFDM. Before moving to FBMC, we need to find a parallel for the receiver part of an OFDM transceiver, which will be covered in part 2.